The Young Priest Initiative (YPI) is a vehicle for finding, forming and supporting young leaders to serve the Episcopal Church. YPI allows young adults to discern a call to leadership outside of the typical parish setting. This happens through:

Before applying, we encourage seekers to have a conversation (or series of conversations) with the priest or campus minister most active in their life, whether that be the rector of the parish where the seeker grew up, the priest at their adopted church while at school, or their college chaplain. This priest/minister will write a letter of recommendation on your behalf. A detailed description of what to write is included in the application as well as a separate document, below. 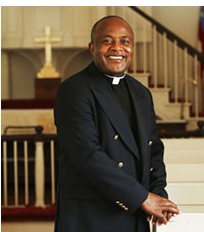 Padre Lee Gandiya is the rector of St. Paul’s Episcopal Church, King George. He was ordained in 1994 in the Church of England. Prior to that, he served as Chaplain to Her Majesty’s Armed Forces (Army) from Oxfordshire, England, where his parish extended over three countries Great Britain, Northern Ireland, and Germany.

Since 1999, YPI has worked with over 100 young adults, many of whom continue their ministry as ordained priests or lay leaders. YPI alumni includes: