Studies in Vibrancy: A Ministry of Presence at Santa Maria

At La Iglesia de Santa Maria, Falls Church, the ministry of presence is a primary focus for the fast-growing congregation that propelled from an average Sunday attendance of 491 in 2009 to 700 in 2012. The Rev. Roberto Orihuela, vicar, explains the church’s philosophy to growth with a Spanish saying: “No hay que buscar que el enfermo venga al medico”: “The doctor shouldn’t wait for the sick to come to him; he should go out to the sick.” 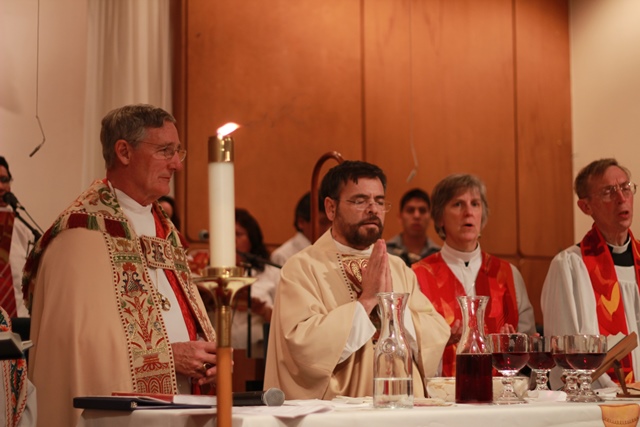 In other words, says Orihuela, “We have to go out to meet people, and announce the good news.” That means being accessible, with the church open and active nearly 24 hours a day. So the church hosts English as a Second Language courses, basic computer training, and forums on health care, immigration and entrepreneurship. “We have diversified our ministries, in a way that almost all the members who would like are involved in the day-to-day work of the church with their unique skills,” says Orihuela.

For a congregation made up largely of immigrants, internal outreach is a constant ministry. Orihuela describes the concept: “For instance, a parishioner and his family establish themselves in Annandale, they buy a house… but they lost their jobs [and] could not afford to pay for their home anymore,” he explains. “So they have to move to another county which is far away from the church. The task for me is to try to keep in touch with them by all means, and retain them as parishioners of Santa Maria.” Part of that mentality is the tight-knit community that is Santa Maria. “We become family to one another,” says Orihuela.

A former Catholic priest, Orihuela started out as the lay leader before he was ordained in the Episcopal Church in 2011. Today, lay leaders form an important arm of the Santa Maria family. It was lay members of the congregation who worked recently to renovate the bathrooms and facilities in the church building. They also form a corps of welcoming and service ministries. But what it boils down to, for both clergy and laity, is a simple philosophy: “We preach not only with words but with actions, and with our own lives as testimony,” says Orihuela.

Sign up to receive daily e-mail updates on #DioVibrancy this week.