Bishop Brooke-Davidson's Meditation for the Second Monday After Christmas

Big doings this week. An important election; drama in the  certification of the national election; rumors  of outbreaks of violence. Bits of 2020 sloshing over into this nice new year. What was once surprising has become rather predictable, if nevertheless continually alarming.

Actually, two predictable things happen on January 6 -- the congressional certification of the votes of the Electoral College, and the Feast of the Epiphany of Our Lord Jesus Christ, a Principal Feast of the Church.

Epiphany is one of my very favorites. It is very often lost in the liturgical sweep of the year, because the first Sunday after Epiphany (when you'd be paying attention to it, at least at worship) coincides with the Feast of the Baptism of Our Lord, which is one of the appointed Sundays for the celebration of Holy Baptism -- the first one since early November. Not to mention that the priest, the choir, and the Altar Guild are all still recovering from Advent and Christmas. Lots of serious business all happening at once.

Epiphany, liturgically, marks the arrival of the Magi -- astronomers and astrologers from Persia, probably -- to pay a visit on the newborn Jesus. "They are late . . . they are always late," the Rev. Dr. Jerome Berryman used to quip. They come bearing peculiar, expensive, and highly symbolic gifts. Israel may have been a global crossroads between Persia and Egypt for centuries, but this visit must still have seemed even stranger than shepherds sent by angels. I mean, we have airports and train stations and paved highways and Google maps -- so how many of you got visits from wealthy foreign scientists or sages a week after your baby was born?  How many of them claimed that they saw it all in the stars? How many of them stopped off at the palace to demand to see a newborn monarch, and were redirected by the staff to your hometown? That's what I thought.

When I was serving in a local congregation, I was never able to finish an Epiphany sermon, because every year, a few minutes into a very erudite (if I say so myself) exposition of the manifestation of the Divine to the Gentiles, the west doors would fly open, drums and trumpets would bang and blare, wild Persian music would warble (who knew we had an oboe player???), and in they would march, dance, and twirl.   In would come wiggling miniature belly dancers and vociferous camel drivers, heavy-laden pages and veiled ladies-in-waiting, some carrying elaborate parasols, some carrying loads of gold, some swinging enormous brass censors billowing with fragrant frankincense. In would prance a comical camel or two, and in would come, in stately paces, the magnificent Magi themselves, male and female, robed, jeweled, and crowned. "Where is he, born King of the Jews?" they would intone, "for we have seen his star in the east. Where is he, born King of the Jews? -- for we have come to worship him."   "Fall on your knees! Fall on your knees!" 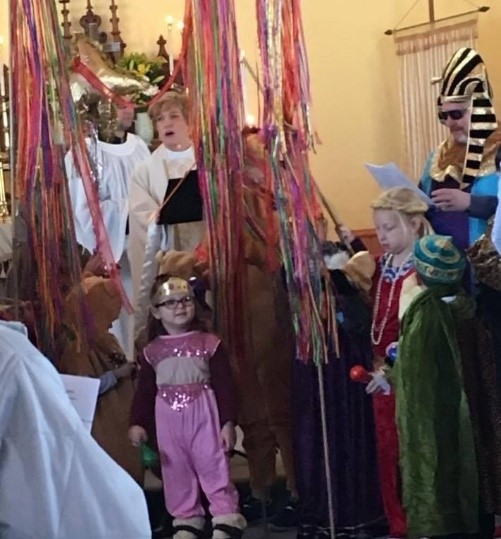 I can preach over a lot of interruptions. But I know when to fold 'em.

And I can boil down the message pretty quickly, too. Here's the executive summary: Whatever polysyllabic, Latinate explanations other people have given you (you remember them, right???), the word EPIPHANY comes from the Greek and means, loosely translated, "Dang - didn't see THAT coming in a million years!"   Other preachers will tell you that Epiphany means a "showing" or "revealing," and that's not wrong. The thing is, a "showing" of God is NEVER EVER EVER what we expect. Epiphany means "I make plans; God laughs out loud."   Epiphany means a breakthrough, a rip in the veil, a brief interlude in another dimension of reality.

We think we've got it figured out; we think we know how it all works; we think we (or our leaders, or our doctors or priests or heroes or saints) are masters of the universe. Then we get Epiphany, and we are reminded: God is outside of all of our limitations and constraints -- God created the universe. God created order; God makes and keeps promises. But once in a while -- you never know when -- inexplicable, wondrous events reveal the power and love of God. God blesses a migrant family. God throws down a tyrant and leads the people out of bondage and exploitation. God inspires the writing of just and merciful laws even when the people are selfish and thoughtless. God provides a land flowing with milk and honey. God comes into the world with help from a teenage girl and brings redemption and salvation and the beginning of a new creation.

Epiphany reminds us that there is always hope. Even if the holidays were not as merry as we wished; even if we are already botching our New Year's resolutions; even if unwelcome aspects of last year are sloshing into this one when we are oh-so-ready to move on. We don't know how the story will end. We don't even know what will happen in the next scene. God can -- God will -- show up when we least expect it (remember Advent's message?) and throw us the kind of plot twist, the kind of interruption to our well-crafted sermons, that turn our path away from our own navel-gazing and back toward the Kingdom.

January 6 is a big day. Whatever fussing and fuming may occur in the palaces of power, be on the lookout for camels poking their noses under our tents, for tiny belly-dancers and pages, for wise scientists and sages, for rich, peculiar gifts whose meaning is not yet clear, and for newborn hope in the most unlikely and unexpected places. You just never know -- and we won't see it coming.

An unpredictable and blessed Epiphany to you all.